The launch of a Marrickville Heritage Society journal is always a landmark occasion and on Tuesday 17 June about 50 members and friends gathered at The Henson to meet with some of the authors and those who produced it. The Henson was chosen as the venue both as one of the journal advertisers, and, in its refurbished state, as a local venue worth supporting. The Society’s commitment to its members was demonstrated by the fact that it catered for the event and continues to provide each membership of the Society with a complimentary copy of the journal. Other members should receive their copy with the July newsletter. Extra copies are $10 each. 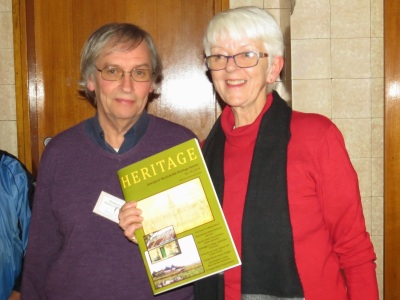 Journal editor Richard Blair reflected on how the aims of this journal are no different from the aims of the Society’s first journal in 1984, Heritage 1, namely ‘to create a much greater community awareness, both within and outside Marrickville, of the rich cultural heritage of this area’. Richard thanked his collaborator Lorraine Beach for her outstanding layout and design; Hillary Goldsmith for her assiduous proofreading over several drafts; Pamela Stewart for facilitating most of the advertising, which together with sponsorship covered the production costs of the journal; and all advertisers and sponsors.

Authors present spoke briefly: Sue Castrique, on the Addison Road army camp; Julie Bishop, who with her husband Noel wrote of their Camperdown house history; Kate Dunbar, who recalled her tough Newtown and Marrickville childhood; and archivist David Roberts, who wrote about Newington College’s 150 years. Lorraine thanked the printers (who attended) and Richard for bringing the journal so seamlessly together.